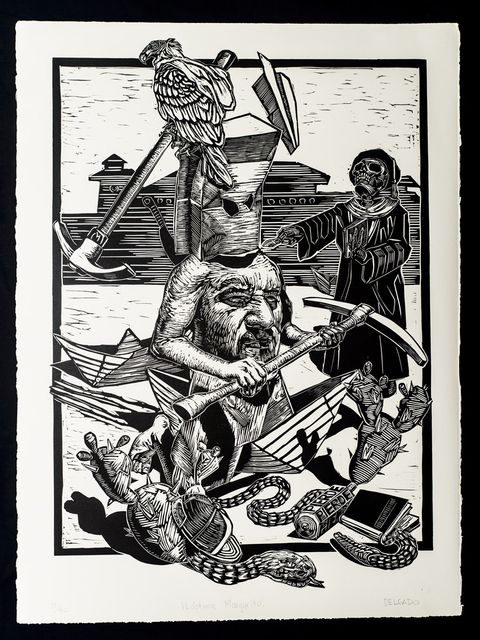 
Francisco Delgado traveled from El Paso, to Oaxaca to do his relief print at "Taller de Grafica Libre," run by Adrián Aguirre and Beatriz Rivas.  From July 3 - 11, they printed 4 editions for him, including the big one for our carpeta: 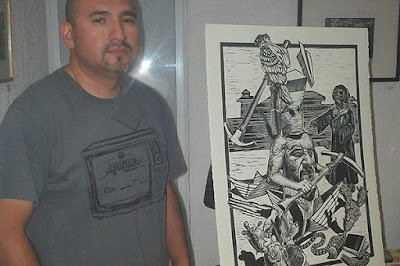 Francisco Delgado with his print --
He was writen up in a Oaxacan newspaper --
"Delgado, un caníbal creativo en Oaxaca" 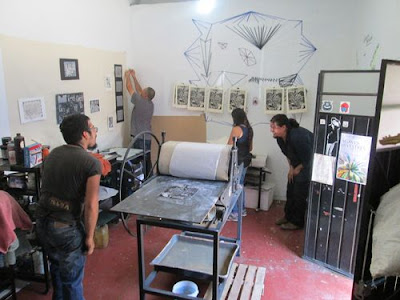 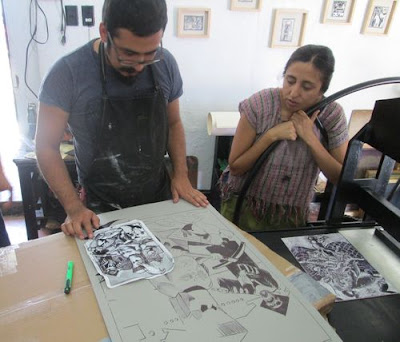 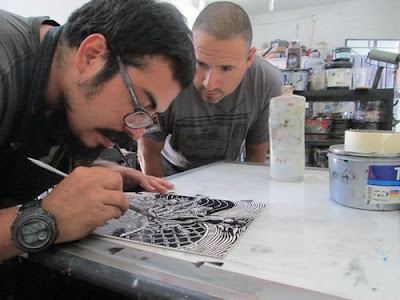 Francisco watches
as Adrian touches up his small relief,
cut on Komatex 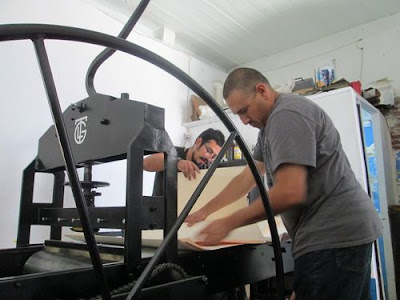 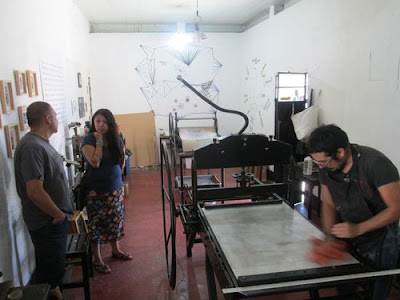 Francisco talks with Nidia Rosales Moreno,
who set the whole thing up 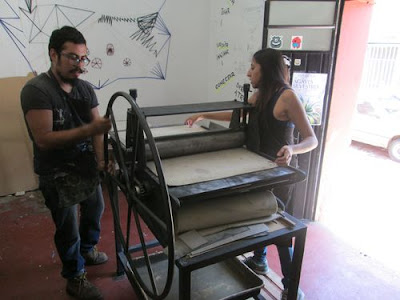 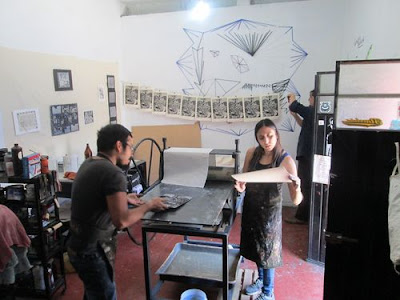 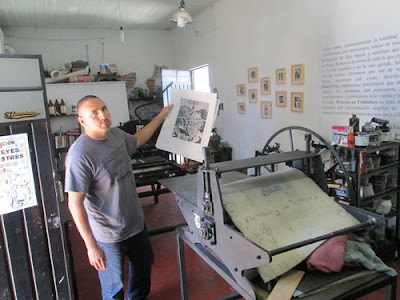 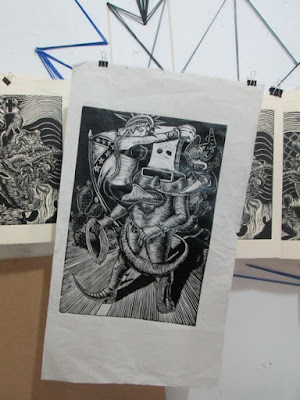 Francisco's medium sized print,
drying in from of the smaller prints

Nidia Rosales Moreno runs the Espacio Centro artspace in Oaxaca, where Francisco gave a talk later in his stay: 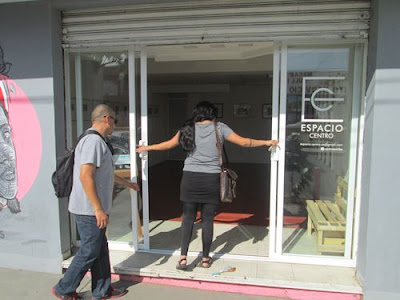 The work from the previous speaker, Daniel Gonzalez from LA, was still hanging in the gallery.  Nidia wrote an article about that exhibition: 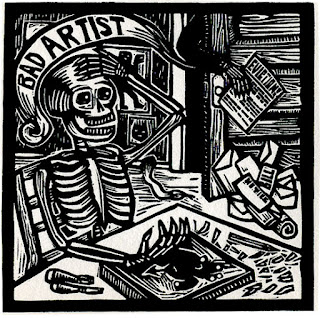 The "Bad Artist" by Daniel Gonzalez,
is the one like himself,
working in woodcut and traditional mediums,
as opposed to creating conceptual art 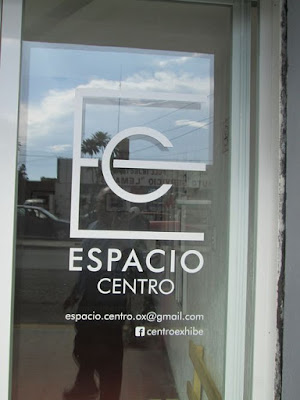 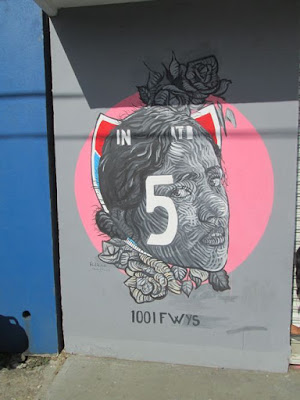 Pavel Acevedo painted
this face on the front of
Espacio Centro.
He is also participating in our carpeta 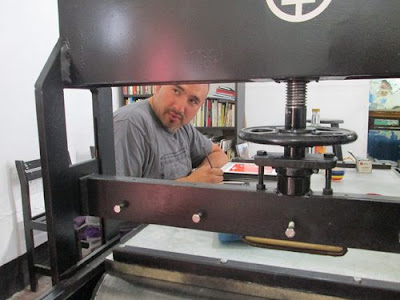 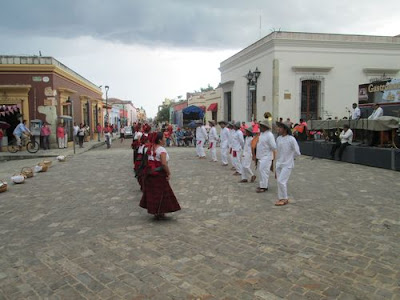 
We are very grateful to Nidia Rosales Moreno for arranging everything.  We met her and Pavel Acevedo in Los Angeles at the SPARC opening of Marietta Bernstorff's Oaxacan exhibition -- "New Codex -- Immigration and Cultural Memory."  We were also fortunate enough to meet Daniel Gonzalez at that reception.

Francisco and I also want to thank Nidia and her mother for the stunning trip into the country around Oaxaca City on a beautiful Sunday.

Also, we want to thank master printers Adrián Aguirre and Beatriz Rivas very much, for opening their "Taller de Grafica Libre," and printing for Francisco Delgado.

Oaxaca has become a significant  Mecca of printmaking, supporting many young talented printmakers some of whom may still be in their twenties.  We are very pleased that Francisco was able to make his large print edition down there; and we are excited that Pavel Acevedo (living in Riverside, but originally from Oaxaca) is participating in our carpeta.  We would love to support this kind of north/south exchange in the future.

Francisco had an opening upstairs at Cinco Puntos Bookstore in El Paso, on Saturday, August 15th, 2015.  He showed his print, and those by Zeke Pena and Jesus "Cimi" Alvarado.  This was the first public showing of any of the prints done for the Desert Triangle Print Carpeta. 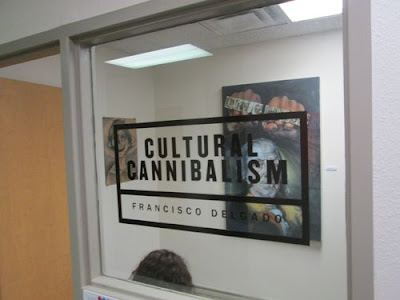 The show was called "Cultural Cannibalism" 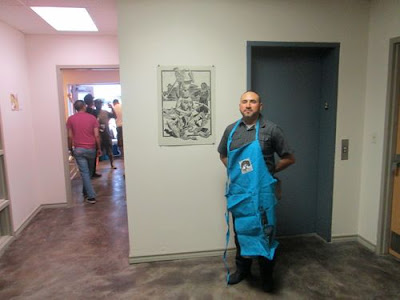 Francisco trying on
the La Ceiba Grafica apron I presented him,
while standing next to his print 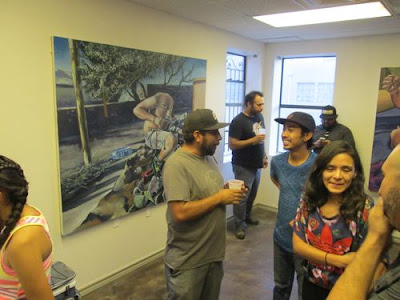 "Radio Flyer" painting by Francisco,
in the background.
"Cimi" with drink, talking to Ramon;
Cristina talking to Francisco 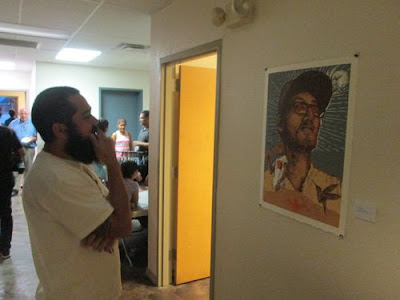 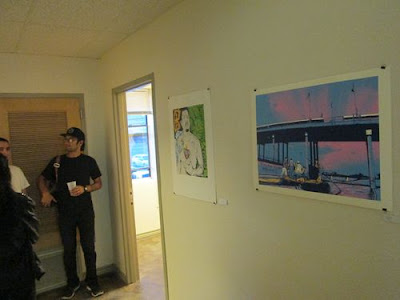 Jesus "Cimi" Alvardo's prints,
with Zeke Pena in the background 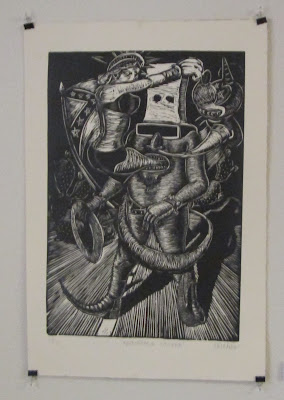 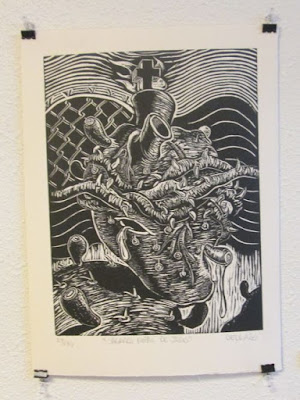 "Sagrado Nopal de Jesus" by Francisco,
was printed in Oaxaca 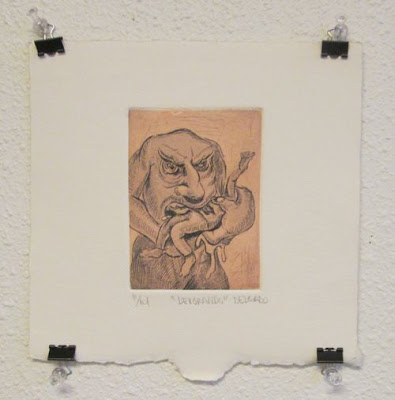 "Devorando" by Francisco,
was also printed in Oaxaca 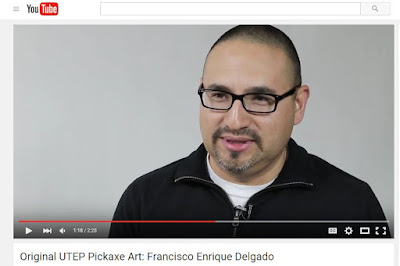 Update (August 2107):  Francisco Delgado went back to Taller Grafica Libre, which had moved to Zaachila, outside of Oaxaca: 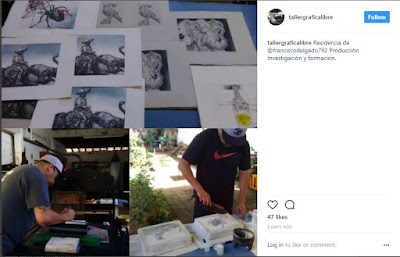 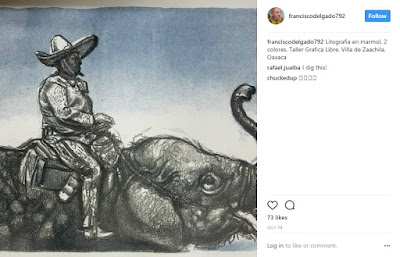 One of the prints Francisco created
in Zachilla

Also, Francisco has created 2 lithograph editions since his Desert Triangle print -- one at La Ceiba Grafica in Jalapa, Veracruz, and another at Flatbed Press in Austin, Texas: 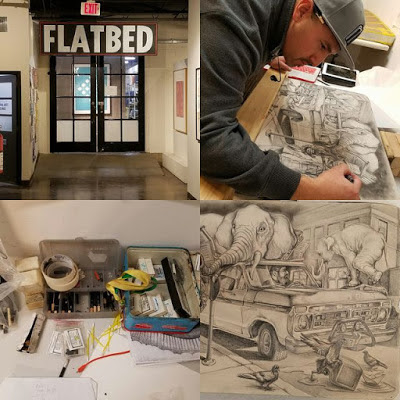