2020 is the moment to look back on five years, to see what we have accomplished.  The Desert Triangle Print Carpeta aimed to make a loud noise from the pit of the Southwest --  El Paso, Tucson and Albuquerque --  to let the world know that there is more talent simmering beneath the shadow of Luis Jimenez.   It always seems that our Mountain Time artists get left out of print and similarly themed exhibitions. 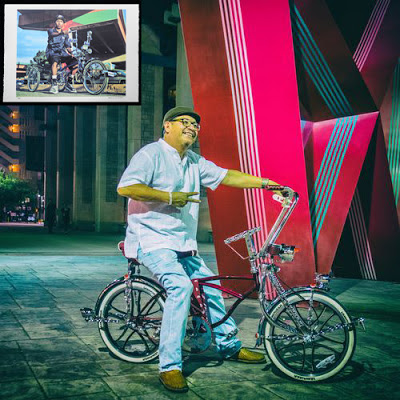 Highlights of the Desert Triangle Adventure
Admittedly the Desert Triangle grew into that goal. Originally this project was conceived as a modest sequel to the Horned Toad/YayBig pop-up print exhibitions in 2014. The idea was to keep the momentum going by showing 10 large prints at the next Chalk the Block arts festival in downtown El Paso. However when that number blossomed to 30 prints, the El Paso Museum of Art invited us to show the portfolio in 2016. At that point the Desert Triangle became something bigger, something that we wanted to show to the rest of the world.

We exhibited in Mexico first, in Patzcuaro and Mexico City in 2015.  Then after El Paso we exhibited in Portland; Chicago; Puebla, Mexico; Riverside, California; Delray Beach, Florida; and Las Cruces, New Mexico, as well as in Tucson and Albuquerque.  By exhibiting north and south, coast to coast, and in two countries, we reached far beyond the Southwest.  Furthermore many of the individual Desert Triangle prints were included in other shows, such as Zeke Peña's print in the current exhibition at the Smithsonian American Art Museum in Washington D.C.  Ultimately the Desert Triangle made a bigger noise than we could have expected.

In 2018 the print momentum continued with the Ambos Lados International Print Exchange.  This project was sponsored by "Horned Toad Prints" in El Paso, and by "Taller Grafica Libre" in Oaxaca, culminating in a collection 158 prints pretty much split between the US and Mexico (plus 2 from Cuba, 2 from Australia, one from Canada and one from Ireland).  Now we are trying to make some noise back and forth across the border.

Mountain Time artists are going to have to make more racket if our region is to get the recognition we deserve from the other time zones. Hopefully the Desert Triangle has stirred more than just 30 printmakers, leading to other portfolios and initiatives in the future perhaps. I believe that we have something to say, and that there is a lot of talent in our desert.