Coming to the El Paso Museum of Art

The Desert Triangle Print Carpeta will be showing at the El Paso Museum of Art --from January 31st - May 22nd, 2016.  Admission is FREE.

Banner announcement
at the El Paso Museum of Art downtown


The Press Release from the El Paso Museum of Art:


A few years ago artist and self-styled “art agitator” KRRRL (Karl Whitaker) of Albuquerque originated the seminal and significant creative initiative of fostering printmaking projects between contemporary artists of the American Southwest. Inspired by El Paso artist Manuel (“Manny”) Guerra’s 2014 Horned Toad Print Exchange, KRRRL played a major role organizing the YayBig Print Exchange in Tucson in association with the city’s YayBig (You and Your Big Ideas) Gallery owner, Joe Marshall, and selections from these complementary exchanges were featured in a Pop-Up Gallery in El Paso in October 2014 as part of the City’s annual CTB (Chalk the Block) Arts Festival.
In the first half of 2016 the EPMA is proud to be presenting the exhibition of KRRRL’s latest collaborative venture in this vein: Desert Triangle Print Carpeta, which includes works by both KRRRL and Manny Guerra as well as the El Paso artists Federico Villalba, Jesús “Cimi” Alvarado, Zeke Peña, and Tim Razo. KRRRL invited thirty different artists living and working within the rough geographic triangle of Tucson / Albuquerque / El Paso-Las Cruces-Ciudad Juárez to create an edition of fifty prints in a format of 22 x 30 or 30 x 22 inches. In this new print portfolio one third of the prints were created across the border in Mexico, where the artists were able to work with master Mexican printmaker Arturo Negrete at the Taller 75 Grados. The artists explore a variety of moods, themes, and techniques, which range from silkscreen to relief printing, and together these handsome prints are marked by boldness of graphic design, rich coloration, and vibrant imagery that variously reimagines symbols from the border and desert, from Hispanic and popular culture, and elsewhere. 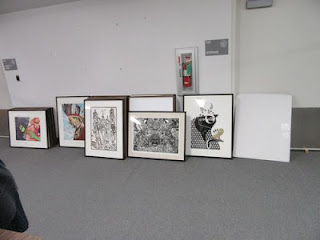 The framed prints have been delivered 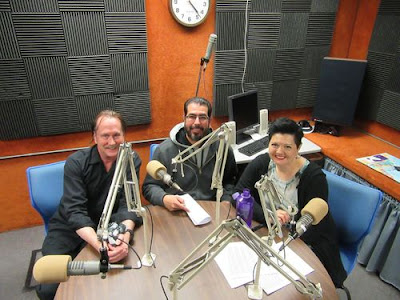 
Meanwhile, across the Rio Grande, another print show opens on the 29th of January, two days earlier.  The YayBig and Horned Toad Print Exchanges are being shown at the Juarez Contemporary. Opening at 6 PM. 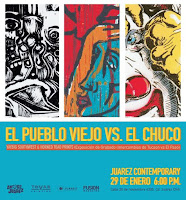